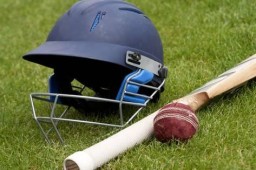 Frome 2s got their season back on track with an excellent team display against a strong Trull side on Saturday. Against a team fancied by many to be league favourites, Frome fought superbly and showed great bottle to edge over the line in a see-saw battle for a vital 33 points.

On a sunny afternoon the day started well, with Frome winning a good toss and choosing to bowl on a soft, damp surface expected to provide some assistance. Opening bowlers Collis and Cox hit their disciplines straight away, with Cox (2-11) getting the Showmen off to a flyer with 2 early LBWs.

Pressure was maintained right throughout the innings, with spinners Veal (2-27) and Arthur Harman (1-40) settling into long spells with tight fields and tying the Trull batsman in knots. As the pressure built Trull attempted to lift the scoring rate, but when Mark Harman ‘deceived’ opener Sapey for 37 Frome began to turn the screw. Collis (2-29) returned to snare two breakthroughs before Mark Harman (3-16) finished things off – leaving Trull all out for 130.

In reply Frome’s run-chase started badly as a pumped up Trull struck in the first over. The returning Unwin looked in good touch with some crisp boundaries however his dismissal saw Trull begin to show their quality with the ball, with tight fields and relentless pressure seeing the Showmen slip to 41-4.

With the scoring rate flat-lining Frome were on the backfoot, however a swashbuckling counter-attack from Cantrell (19) began to shift momentum back their way. When the limpet-like Potter (20) also got in the act, Frome suddenly began to look likely winners – however both fell to catches in the outfield and when Arthur Harman was pinned LBW at 97-7 the match was back in the balance.

Heroes were needed, and thankfully Pinchen (27) and Mark Harman (17*) stepped up – a gutsy partnership of 33 mixing admirable patience with controlled aggression taking Frome to the brink of victory. Pinchen departed with 1 to win however Harman fittingly ended the game with a towering six to kick-off jubilant scenes in the dressing room.

A great display of character from Frome after the disappointment of last week - a strong performance with the ball and impressive determination not to buckle with the bat bodes well for matches to come. Another tough game at home to North Newton awaits next Saturday.